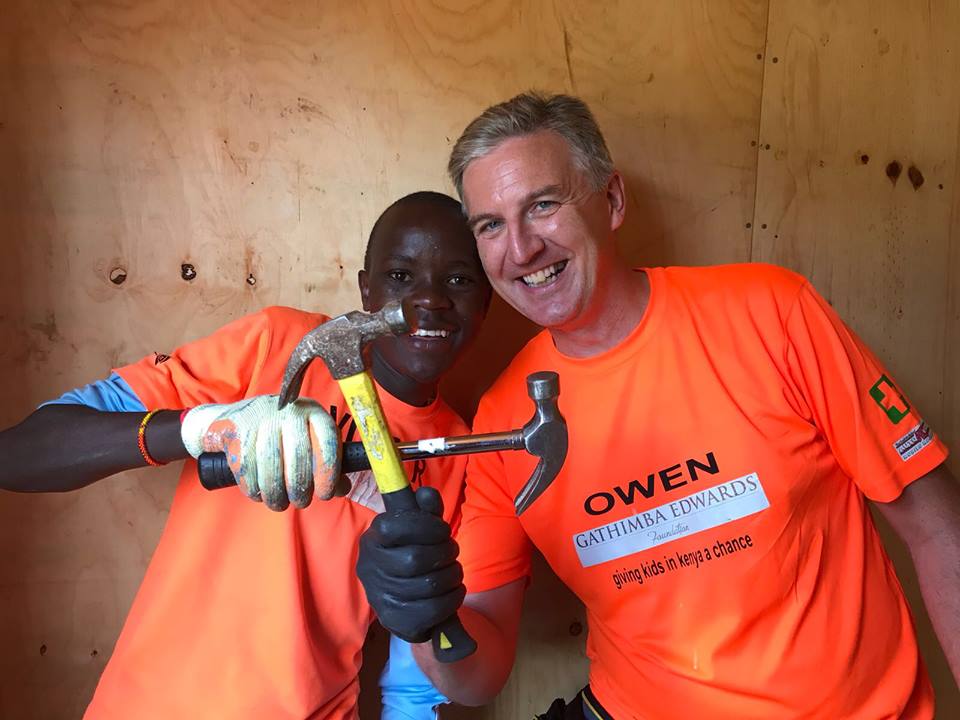 Since 2014 we have built 50 homes for 212 children.  We believe that every child deserves to have a roof over their head, a comfortable bed to sleep on and a safe place of shelter in which they can also study.

As part of our annual house building trip, international volunteers have been involved in the construction of 36% of the homes we have built to date. Each year, along with local volunteers and workers, you have the chance to be part of a team that can lay the foundations to a brighter future for kids in Kenya.

Each year, this unique opportunity to build houses in Kenya, offers you the trip of a lifetime.  Our trips are offered at cost price and in addition we kindly ask each volunteer to raise a minimum of £1,000 towards the cost of building materials, land, solar panels, furniture and the leasing of an additional plot of land for each family to use for farming. The 2023 building project will take place in Karatina, Kenya.

The standard 14-day trip package costs in the region of £1,200 and includes:

Please note that this do not include international flights, visas or vaccinations. A sample itinerary can be found below.

A comprehensive information document can be provided on request covering everything that you need to know including costs for each of the above itinerary options. Please get in touch with any questions, to sign up or to receive the full information document.

We welcome companies or individuals that may be in a position to sponsor elements of the building work or team t-shirts.  Company sponsors are a huge support and help us to purchase timber, windows, doors, metals, land and tools to complete the build.

Our 2020 trip has been postponed for the last 3 years due to Covid-19, but we are delighted to say that an anonymous donation of £20,000 enabled our staff and local workers to build 4 houses for these 4 wonderful families below.

Mama Vivian & her children previously lived on the same street where Myles Edwards and his family lived in Iten.  Myles first became aware of the family when Vivian, then aged 17, knocked on his door and politely asked for 500 shillings (£4) to be able to get the bus back to boarding school because she had no money. She could have asked for anything but she just wanted to get to school!

After Vivian’s mum found out Myles had helped she took a bag of potatoes to the GEF office to say thank you.  She had worked a full day to earn that bag of potatoes.  As a casual worker she works on farms and sometimes gets paid in produce rather than money.  As a single mum Mama Vivian really struggled to support her family, they lacked enough food and on occasion couldn't afford to pay their rent.  When that happened the family were locked out of their single room house because the landlord had put a padlock on the door until rent was received and they would sleep outside in the cold.  Despite this Mama Vivian and the kids Vivian, Karen, Sandra & Gloria continued to smile and hope.

Their new house at our GEF village has kept those smiles and hope burning bright and Mama Vivian is thriving with her small garden and additional one acre farm where she is growing maize for consumption and sale.

Mama Rency lived in a single room rental house with her four young girls.  She worked long shifts on building sites where she was paid up to 300ksh (£2) per day; and so affording basic needs was a huge challenge.  Her youngest daughter, Joy, is a toddler and so she also had to pay someone to look after her for half a day until the older children came home from school and took over.

Her 3 other daughters, Miriam, Rency, and Valentine, were previously constantly at risk of being sent home from school due to school fee debts that had accrued.  Thanks to 3 individuals who sponsor them each month, the girls are now in school full-time without fear of being sent home.

The family now have the safe living and study space they deserve in our GEF village along with their additional acre of land for farming.

Info and photos to be updated soon.  The family are also living happily at our GEF village.

Info and photos coming soon.  The family are living happily in their new home built on their own land next to our GEF village.