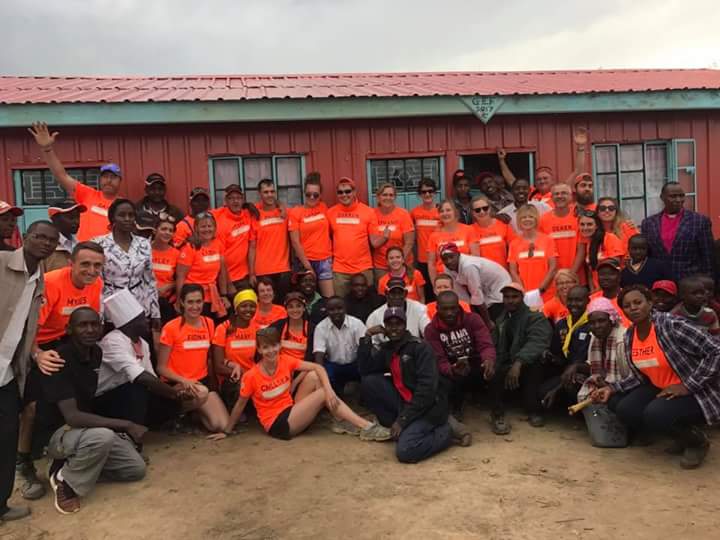 In October 2017 our volunteers built 4 houses for 2 families in 7 days - 1 day ahead of schedule!  You can watch how we did it by clicking here.

The family pictured had been through some very tough times. The 6 of them lived in a broken wooden shed in Nyeri.  James (right) scored very impressive primary school marks of 352/500 but couldn’t start secondary school in Jan 2016 due to lack of £140. His dream of becoming a doctor was in jeopardy and he worryingly decided that he wanted to try to commit suicide so that he wouldn’t endure so many struggles; but thankfully he was convinced not to by our GEF staff and a local counsellor.

Thanks to kind sponsorship from Alan, James is now in college and tells us the sky is the limit for him and his family. He is determined to change his family’s life for the better.  He is now living happily with his mum, brothers and twin sisters Faith and Ann who are currently in primary school thanks to support from our house building volunteers, Suzy, Susan, Fiona and Susan.

Throughout their struggles the girls never stopped smiling even though they were living in some of the worst conditions we have seen.  These smiles are even bigger now thanks to the volunteers efforts and the girls provided us with lots of singing and entertainment during the building. James' brother Paul is also back in school thanks to sponsorship from Claire and Chris as part of our #12days12futures campaign in December 2016 and his brother Stephen is in employment.  There is an amazing unity between the children and their mum.

Sadly in December 2018 we lost one of our amazing volunteers, Fiona Fraser, who had been a central part of the 2017 building trip.  She was always at the heart of the action and was delighted to have built a home for Ann who she sponsored along with her sister Susan and friend Susan Brown. Despite losing her voice on the trip she powered through with no complaints and always had a smile on her face.  On return from Kenya, Fiona began volunteering in our Aberdeen office during her lunch breaks and also at fundraising events. She did a huge amount to help our work from behind the scenes and also provided some unforgettable moments of laughter.  Fiona’s spirit, efforts, determination and love will live on in everything Ann and ourselves do.  We miss Fiona greatly and will never forget her.

In the family pictured above, Humphrey (right) scored very high primary school marks but had been sent home from Form 2 of secondary school due to a lack of fees and Form 1 arrears.  He was set to be unable to complete his education.  They lived just outside Karatina where they shared a small rental house. Mum Lucy shared the single bed each night with little Fidelis and her sisters Phoeby and Ivy whilst Humphrey and his younger brother Gibson stayed next door in a small room. Prior to this the family had lived with their grandparents until sadly they both passed away. Much to our anger, their uncles chased the family away, refusing to let them stay in the family home or support them in any way.  This left them homeless until a kind landlord decided to give them a small house temporarily but they then had to move from house to house as they struggle to pay the rent. Earning £1.50 at most each day working long hours on a farm, it was pretty much impossible for Lucy to pay school fees – especially Humphrey’s university and Gibson’s secondary school fees - or to ensure that they were all eating regular meals.

We are delighted that all 5 children are now in full time education and eating regular meals thanks to support from sponsors who the children write with regularly. Humphrey completed secondary school and scored an impressive B- which paved his way for university, which he has now graduated from. Thanks to Maggie and Andy in Scotland we were able to help Lucy start her own business. The family are one of the most humble and polite families we have met.  Following a shopping trip which we took them on in April 2015, Lucy wrote a lovely thank you letter to Gideon Gathimba thanking us for our support.

Huge thanks to all of our volunteers, their friends and family for everything you did to help us successfully build the 4 houses in 7 days. The houses were built on GEF land and each family was given a portion of the land to grow various foodstuffs that provide them with food.  An additional plot of land is leased for them for 1 year, and seeds/fertiliser provided so that they can generate an income for themselves. Following this first year the families take over the leases themselves.

As a team our volunteers raised a whopping £36,161!! The total land and building costs came to £27,499 which means that £8,662 more than required was raised. This £8,662 enabled us to build a new house and kitchen for a family in Iruri who were living in desperate conditions and also made some of the big improvements required at the Pavilion Village children's home such as painting, windows, external flooring repair, curtains, tiling, improvements to the staff houses, an activity area for the young kids and more. After the building works were complete guests enjoyed visits to The David Sheldrick Elephant Orphange, Nairobi National Park and Masai Mara - where we saw the famous 'Big 5' animals withing 5 hours! Thank you to all of you for transforming so many lives.

I met some incredible Kenyans and experienced a very warm welcome to a country I now love. I met and worked with amazing volunteers from the UK, Kenya, Australia and the US. All the volunteers poured soooo much love and passion into the House Building Project.

I can’t put into words how special it was to meet my sponsor child, Dan. He is such a wonderful person.  I had the opportunity to spend quality time with him. He even taught me a few Kenyan dance moves!

I attended the awe-inspiring house opening ceremony. The speeches, singing, and dancing and (happy) tears are imprinted on my memory.   I will never forget how excited the families were about moving into their new houses!

back to house building