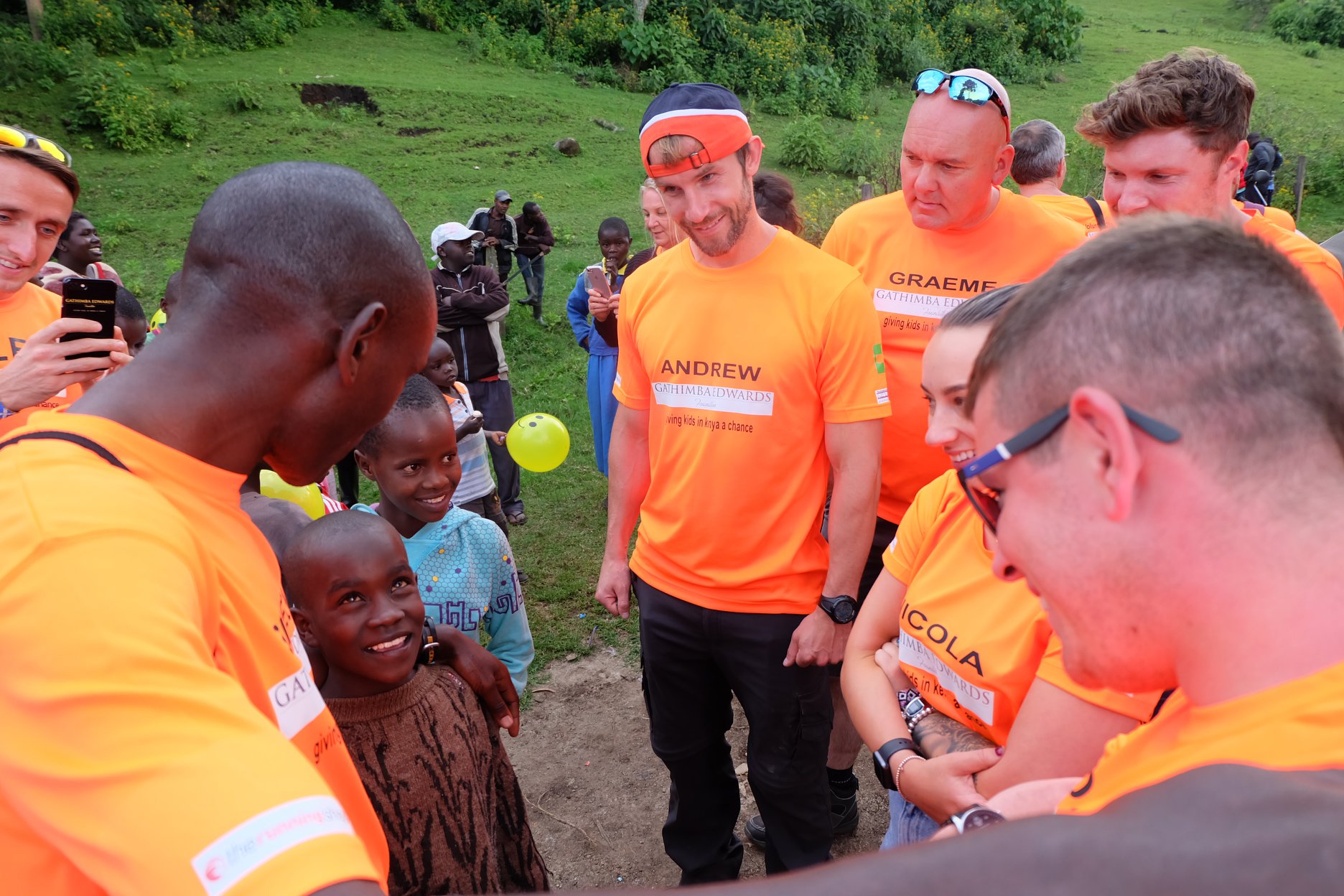 In July 2018 our group of 29 international volunteers and many from within Kenya built 4 houses in just 6 days, breaking all records we have achieved in previous house building trips.  No-one could quiet believe it, but it just goes to show when a group of people come together to make something happen special things can be accomplished.  You can watch how we did it by clicking here. We wanted to tell you more about this trip through the eyes of our volunteers this time so the next part is told by Kayleigh, who came as a volunteer and has now joined our UK team.

"Let me start with the main photo…this picture shows Sarah (9 years old) being told by Gideon Gathimba that she will have a new home 1 week from then and also that Darren’s (right) parents would be sponsoring her through school. It’s the picture from all of my collection that brings me to tears. Her smile explains everything! Sarah's family (her mother Christine and 4 other siblings; Nicolas, Bernard, Isaac and Nelly) have been sleeping in a mud hut for 11 years, at the side of a dirt road so rough that vehicles can barely get over it. They previously lived in the forest but were evicted by the Government and then put on a waiting list for a home. They were 10th on the list but when it came to their turn the local area Chief stole the land and gave it to his son, leaving them to remain in these desperate and dangerous conditions. Until now!

Now they have a new home with more than one room (3 bedrooms), where they can sleep without being choked by fumes from the cooking and where they will have actual beds and mattresses and not have to sleep in a seated position because there isn't enough room. They will have a roof that doesn't leak. Their new home will have one solar panel to enable them to have light in each room. They will have a water tank to collect rain water for showering and cooking. They will have a separate kitchen. And they will have land and seeds supplied by GEF to help them become self-sufficient over the next year. Gathimba Edwards Foundation and the other volunteers I had the pleasure of assisting made this happen and it’s just incredible.

I can't even put the experience in words without tearing up, it has been life changing - both for the children we have helped and for me. To see these kids with barely anything in life except the old clothes on their body and the biggest smiles on their faces just goes to show that people can create their own happiness, not possessions.

It really was an eye opener to see the families before we starting building and the second family we helped lived in a mud hut in the middle of a forest.  When the volunteers arrived, we had to leave the matatus behind and walk 10 minutes through the forest before we reached their home. I remember it well as we spotted monkeys high in the trees and a woman who passed us with a stack of wood she had balanced on her head. 4 children in this family, Joel, Millicent, Eugene and Mercy all live with their grandmother here.

They all slept on a mud floor until GEF were able to get them beds and bedding, but even with beds this was not somewhere any person let alone a child should be living.  Myles & Gideon explained to the volunteers that Millicent told GEF previously, she is always afraid when she walks to and from school through the forest.  She hoped one day she will walk without fear. The family were so welcoming towards us, even when it was time to go Gogo, the Grandmother, and Jennifer the children’s mum insisted we stay longer to have some chi.  They handed out cups to everyone and had 2 full flasks ready for us.  Honestly it warmed me so much, they have so little yet they wanted to give all 29 volunteers a cup of tea.

The other two families, namely the Ewoi and Ekele families, already lived locally to the Iten area.  Both families lived in similar accommodation; one room buildings per family with leaking roofs and a smell from the kitchen fumes, which burned right next to the bunk beds, that I can’t even describe.  It choked me just being in the house for a few minutes.  The whole group really got to know the children well from both families as Viki (18), Dan (18) and Titus (13) joined us on site to help build the houses.  The kids were actually involved in the making of their own bedrooms, and they had no problem getting stuck in.  Humphrey (21), who is now in university thanks to support from GEF, came to assist too.  He travelled 3 hours from his home in Karatina to join the team; he wanted to give something back after he had a house build for his family by GEF last October.  I remember when I was 21 and I can say no one would have got me on a building site in my spare time.  These children and youngsters are amazing people who have very little, while we haven’t built them mansions or such like, to them we have given them a place called home, to feel safe and warm with family.

What more do any of us really want? If you ever have the opportunity to do a volunteer trip to help someone or something then grab it with both hands. If you think one person can't change the world let me tell you... you are wrong! Together, individuals make a collective, who in turn can end up being the light the world needs more of!

I feel one of my fellow volunteers, Declan, wrote about his time on the trip in a very accurate and heart-warming way.  Please have a read:

I had such an amazing time and meet so many fantastic people that I have now adopted them as my Kenyan family. We didn’t just build the families a house but a home.

We had built them a future platform to better themselves! I've learned so much on my trip to Kenya and made so many memories that I’ll cherish for the rest of my life. I feel like I’ve actually achieved something meaningful with my life now, it has truly been one of the best experiences of my life and I’d recommend it to anyone.

back to house building